The inter­play of glass and light can work mir­a­cles. When imag­i­na­tion is com­bined with excep­tion­al skills, col­lab­o­ra­tion and tech­ni­cal pre­ci­sion, some­thing extra­or­di­nary comes into being. Our bespoke projects prove that a light instal­la­tion made to the spec­i­fi­ca­tions of an indi­vid­ual client can bring both an inti­mate space and a large inte­ri­or to per­fec­tion. It does not mat­ter whether it is a pri­vate res­i­dence, a con­cert hall, a busi­ness cen­tre or a hotel restau­rant. Togeth­er with our clients and part­ners, we are able to trans­form any space into a place where you will feel special.

Scroll to top ↑
← Dare to Dream
Back to the Roots →
Stefan Mihailovič’s kinetic light installation A:Live changes the ambience of a hotel lobby, a private residence or even a luxury yacht instantly. The composition, colour and texture of the glass is customized based on the requirements of even the most demanding clients.
The most prominent feature of the lobby of the Four Seasons Hotel in Kuwait is a hanging object resembling a huge crystal. Created by the famous duo of designers, George Yabu and Glenn Pushelberg, it pays homage to the irresistible beauty of the simple shape. With just one ray of light, the installation livens up the space with an exquisite play of colours.
The Symphony light installation by Libor Sošťák enhances the ambience of three floors of the Dubai Opera House – a breathtaking building located close to the sea as well as the desert. The 3000 crystal drops were inspired by fishing nets, air bubbles and grains of sand.
The architecture of the Mahidol University concert hall resembles a human skeleton. And the light installation composed of more than 300 glass “neurons” by Jana Růžičková symbolizes the central organ of the human nervous system, which controls the whole organism.
It is thanks to the neurons that information, a perception of sound for instance, is transmitted through the Human body. The Prince Mahidol Hall ambience changes in harmony with the music played in the concert hall.
“We wanted to create an impression that would be like watching the Milky Way and being able to see the birth of a star.” This is how Jana Růžičková and Katarína Kudějová-Fulínová describe what they wanted to achieve when designing the light installation that reigns supreme in the atrium of the InterContinental Hotel in Tianjin.
Light, art and religion. Inspired by the shapes of mosques of great importance, designer Khalid Shafar created the Silent Call light installation that, like a muezzin, reminds the believers that it is time to pray.
It is capable of changing both in time and space. The kinetic light installation Supernova by Petra Krausová responds to the movement of people in the room, or patiently waits for the cue to change the arrangement of its glass feathers.
When Arab architecture meets European Art Deco. A crystal chandelier reminiscent of a cathedral pipe organ enhances the ambience of the La Mamounia Hotel tea room in Marrakesh. It was designed by Ivana Zuskinová and Katarína Kudějová-Fulínová to mark the centenary of the foundation of the hotel.
La Mamounia Hotel boasts large gardens, and its Italian restaurant with a made-toorder light installation above the open kitchen offers a beautiful view of the oasis surrounded by dunes.
The crystal chandeliers in the Michelin-starred chef Alain Ducasse’s restaurant allude to bamboo plants which are symbolic of invincibility and perseverance. They were created by the Jouin Manku studio designers for the Morpheus Hotel in Macau.
More than 600 “bamboo stalks” made of glass surround the tables, making the diners feel as if they were in the middle of a bamboo forest in China. “Before cooking, there is nature,” says Ducasse.
The MVRDV studio architect Winy Maas and designer Jana Růžičková created the light installation Concurrency, which sets the tone for the 133 Way Yip business centre in Hong Kong. Clear glass suggests transparency – an essential aspect of business negotiations.
Glass components alluding to beams of light are suspended from the ceiling in a sophisticated configuration that refers to the places in the world from which businesspeople have travelled to Hong Kong for meetings.
Crystal chandeliers in the shape of palm leaves enhance the ambience of the upmarket restaurant at the Four Seasons Hotel in Jakarta.
Each of the fourteen lighting objects hanging from the ceiling is two metres in diameter. The design, material and arrangement of the lighting fixtures perfectly complement the marble, leather and brass details in the interior. Viewed from below, the installation gives the impression of delicate crowns of palm leaves. 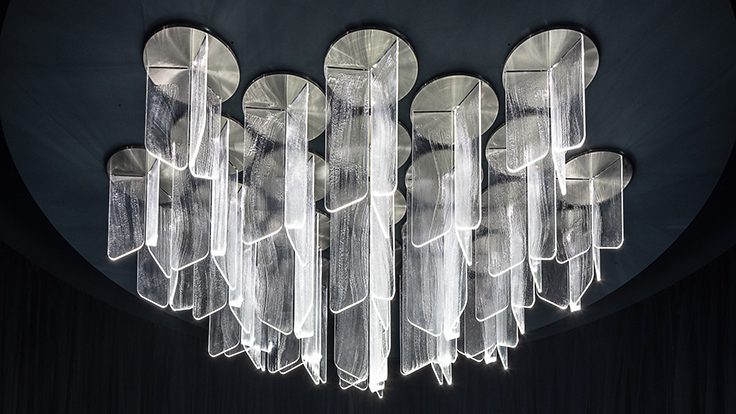 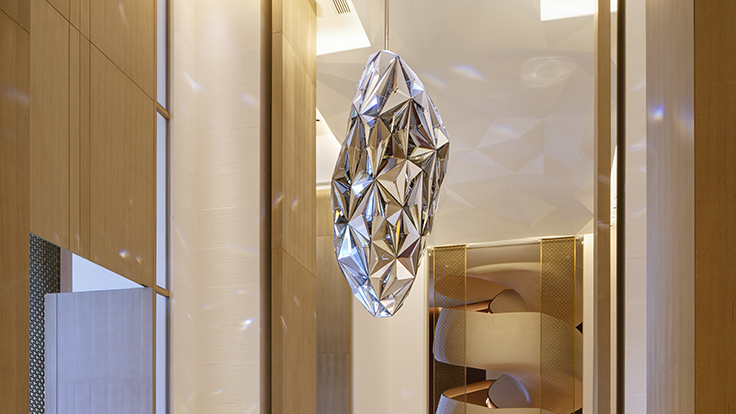 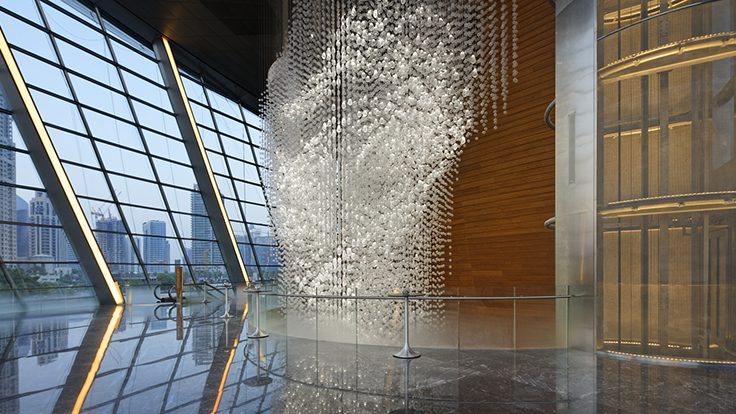 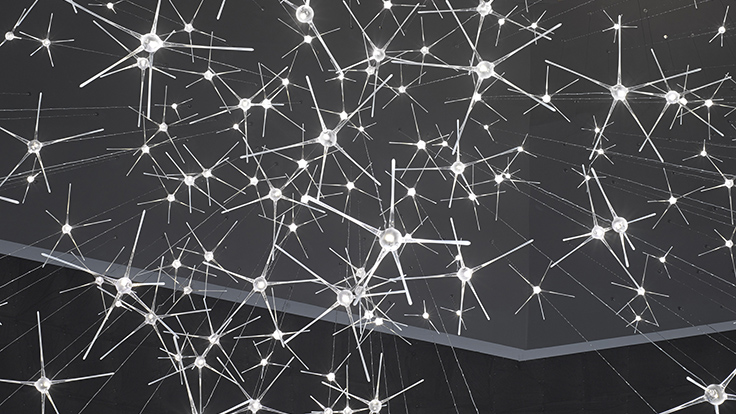 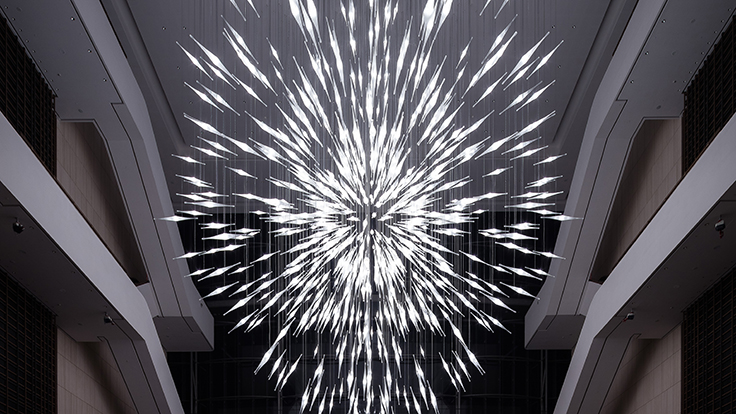 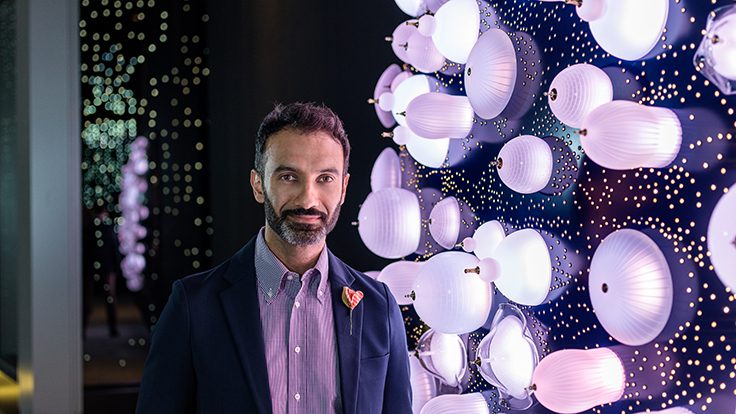 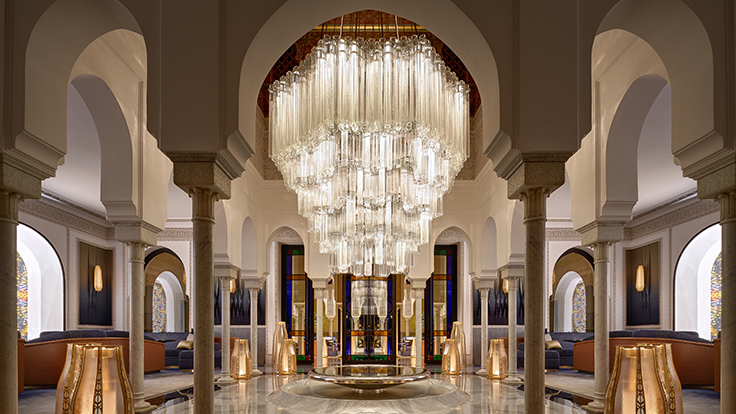 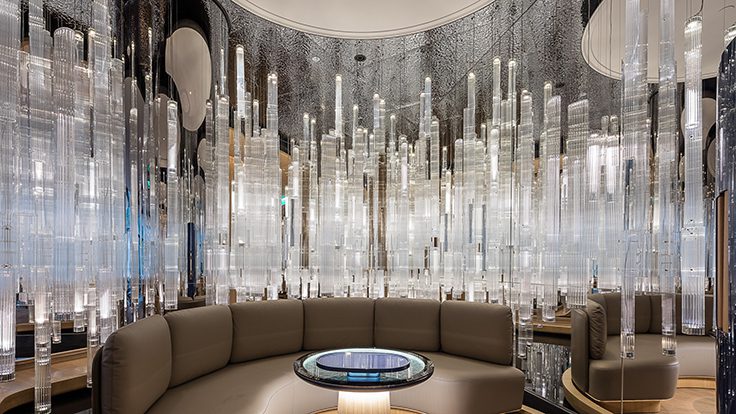 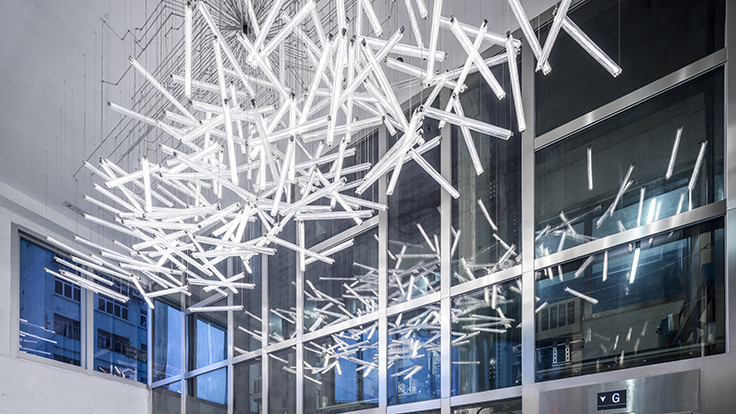 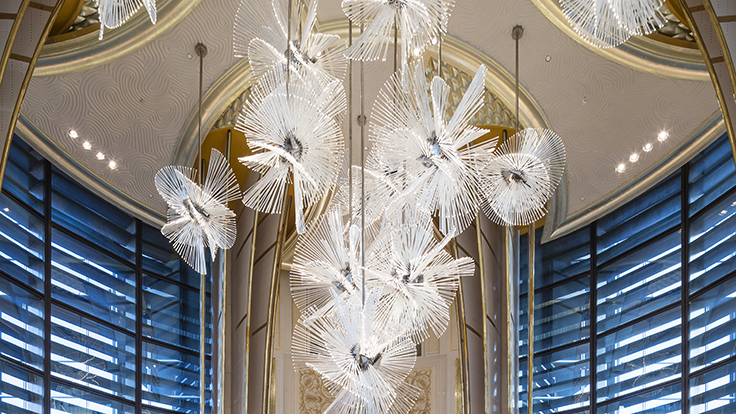 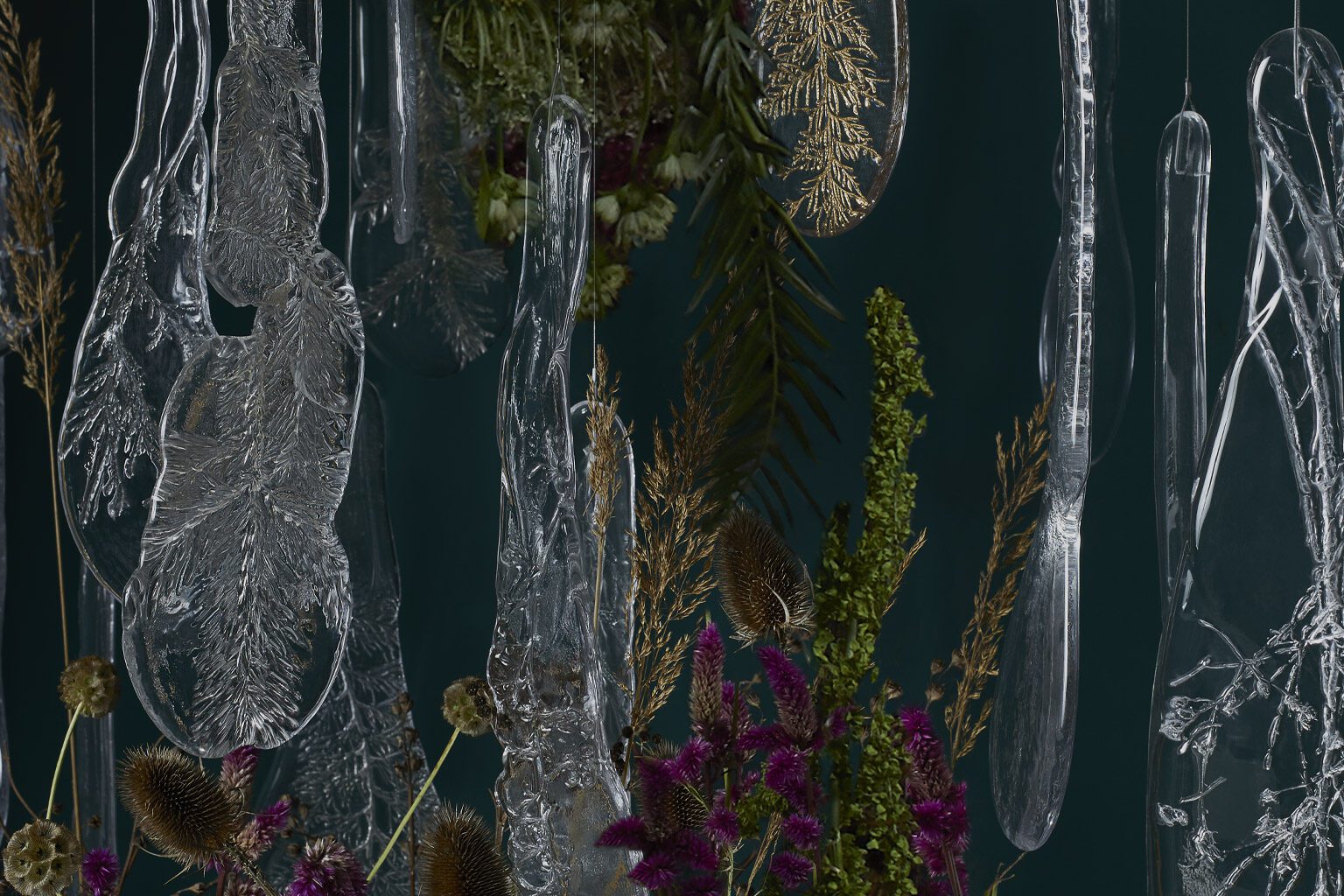 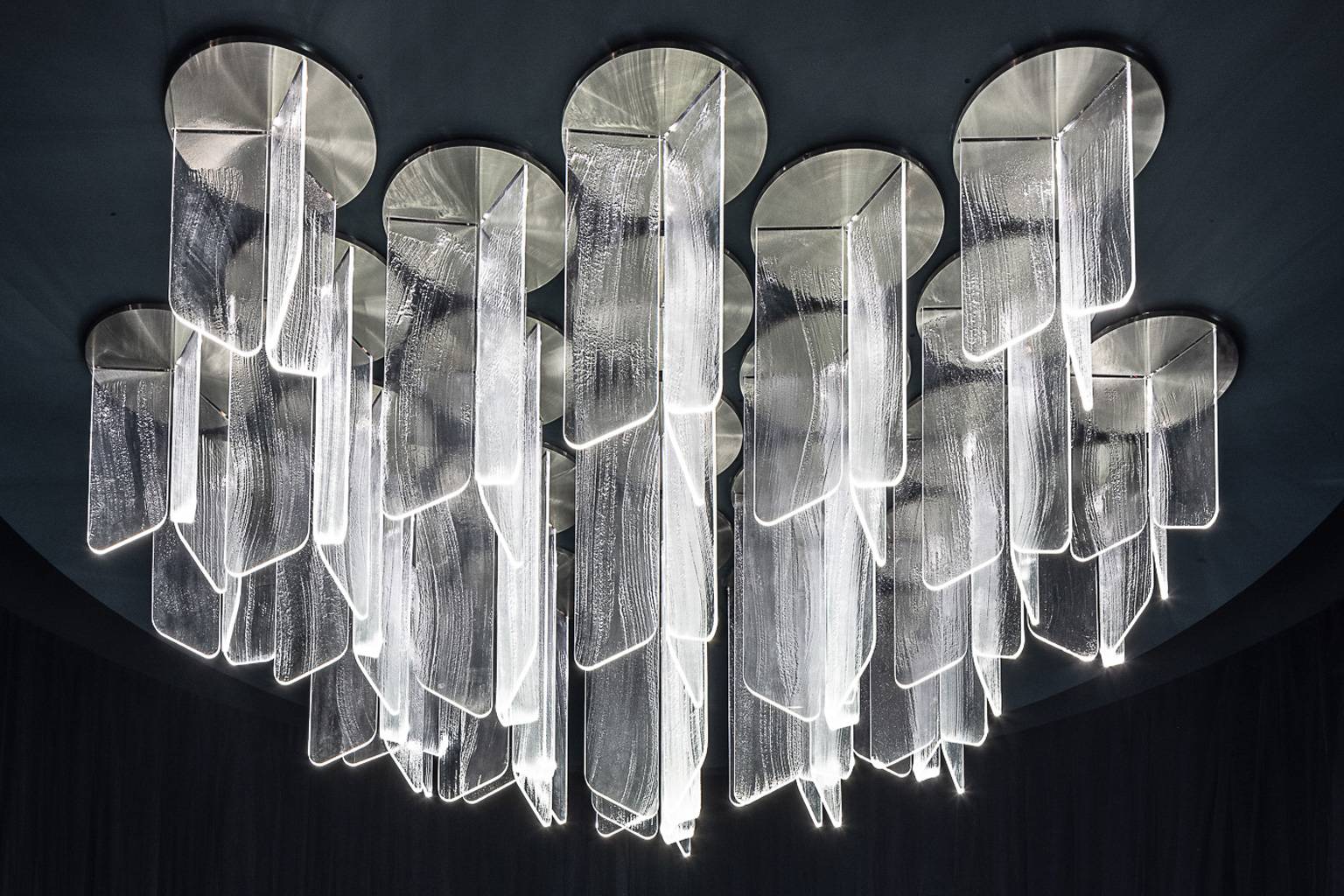 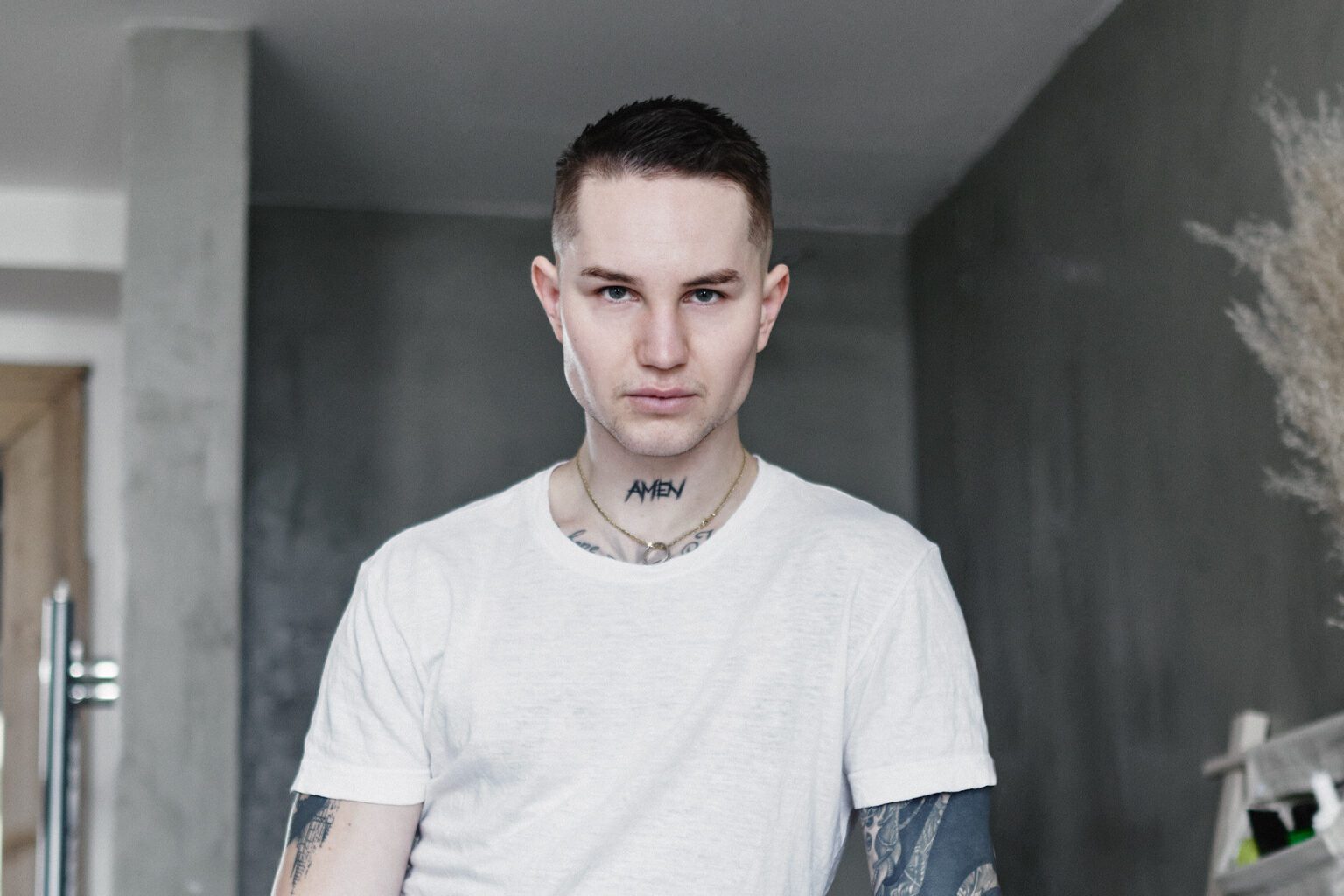 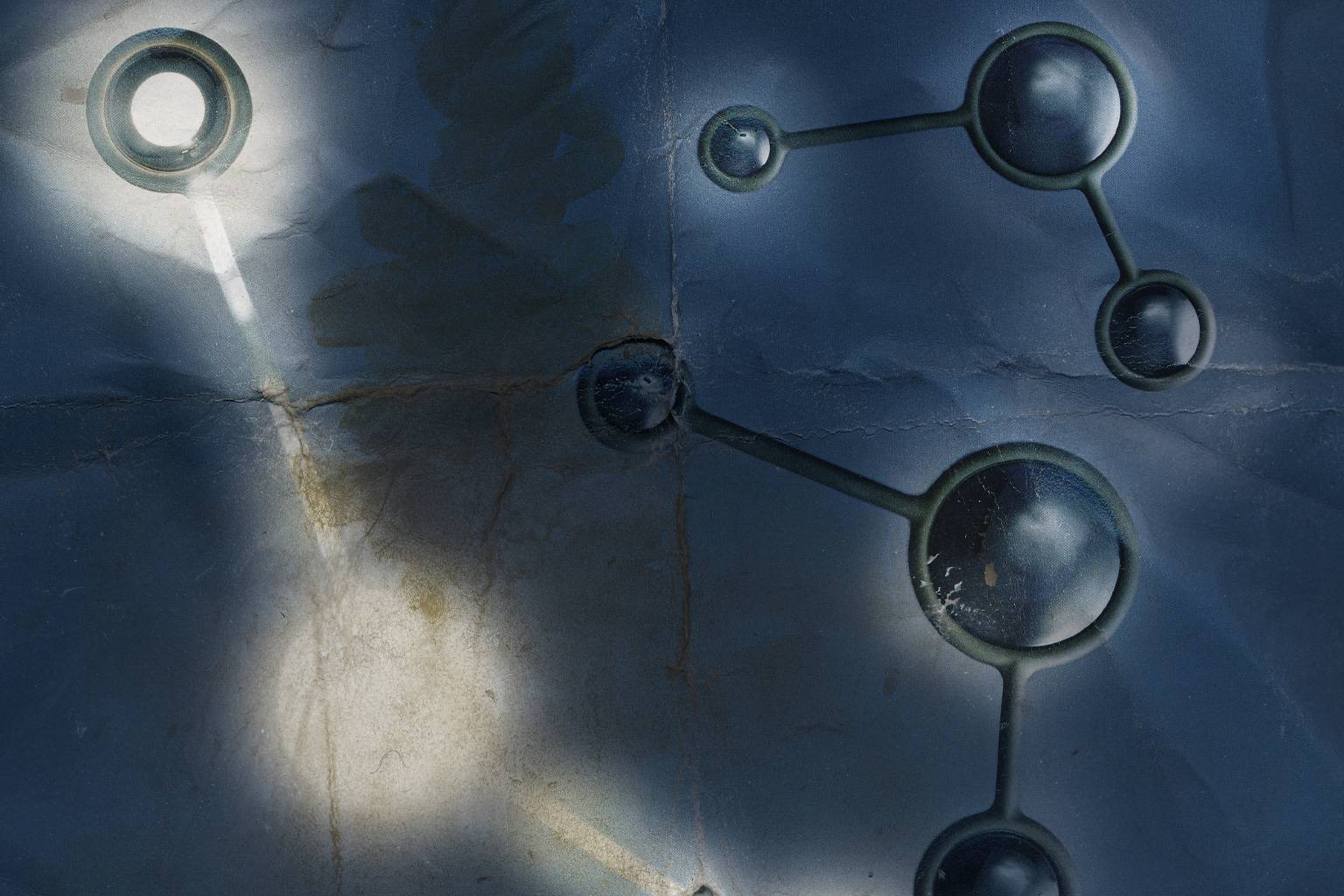 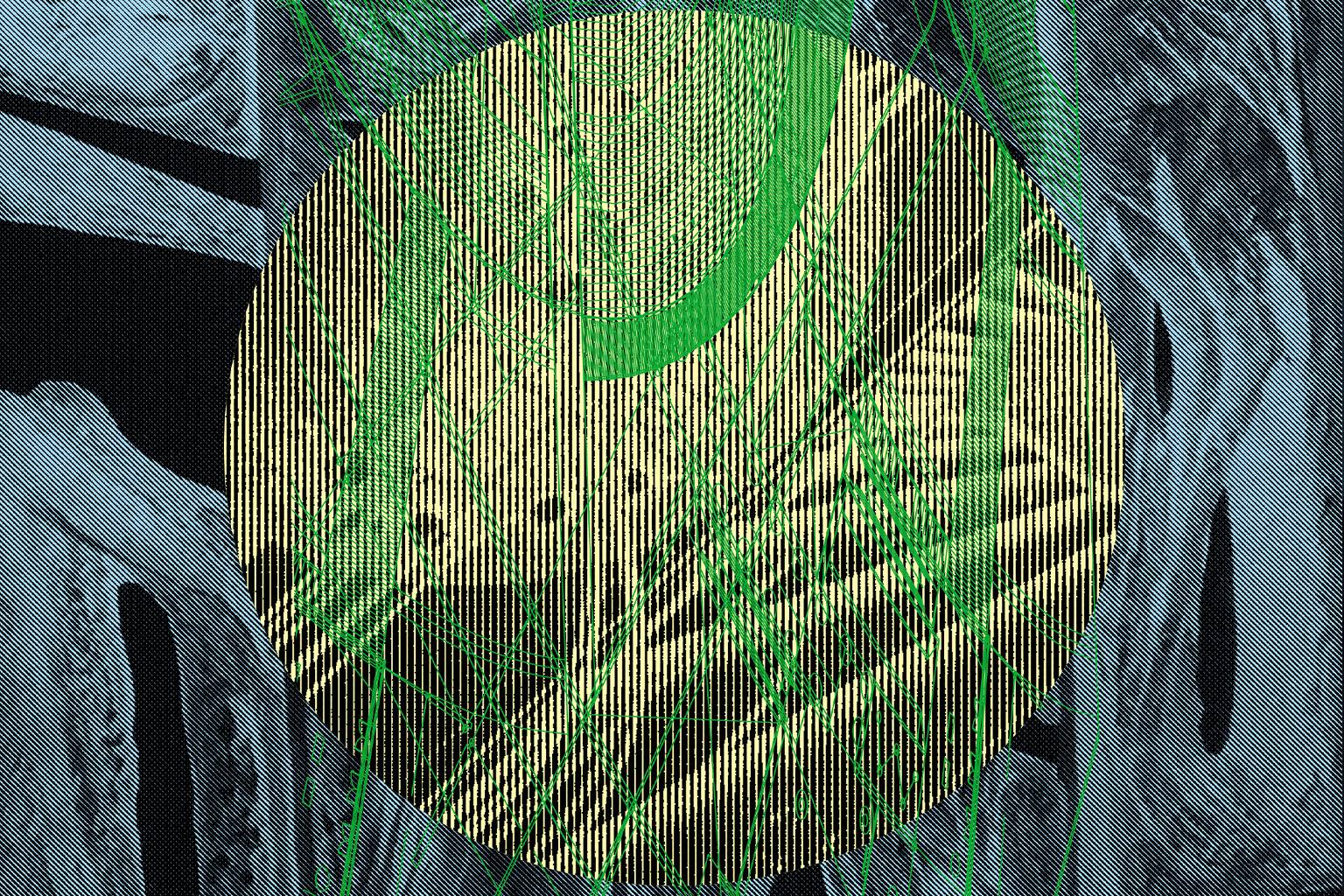 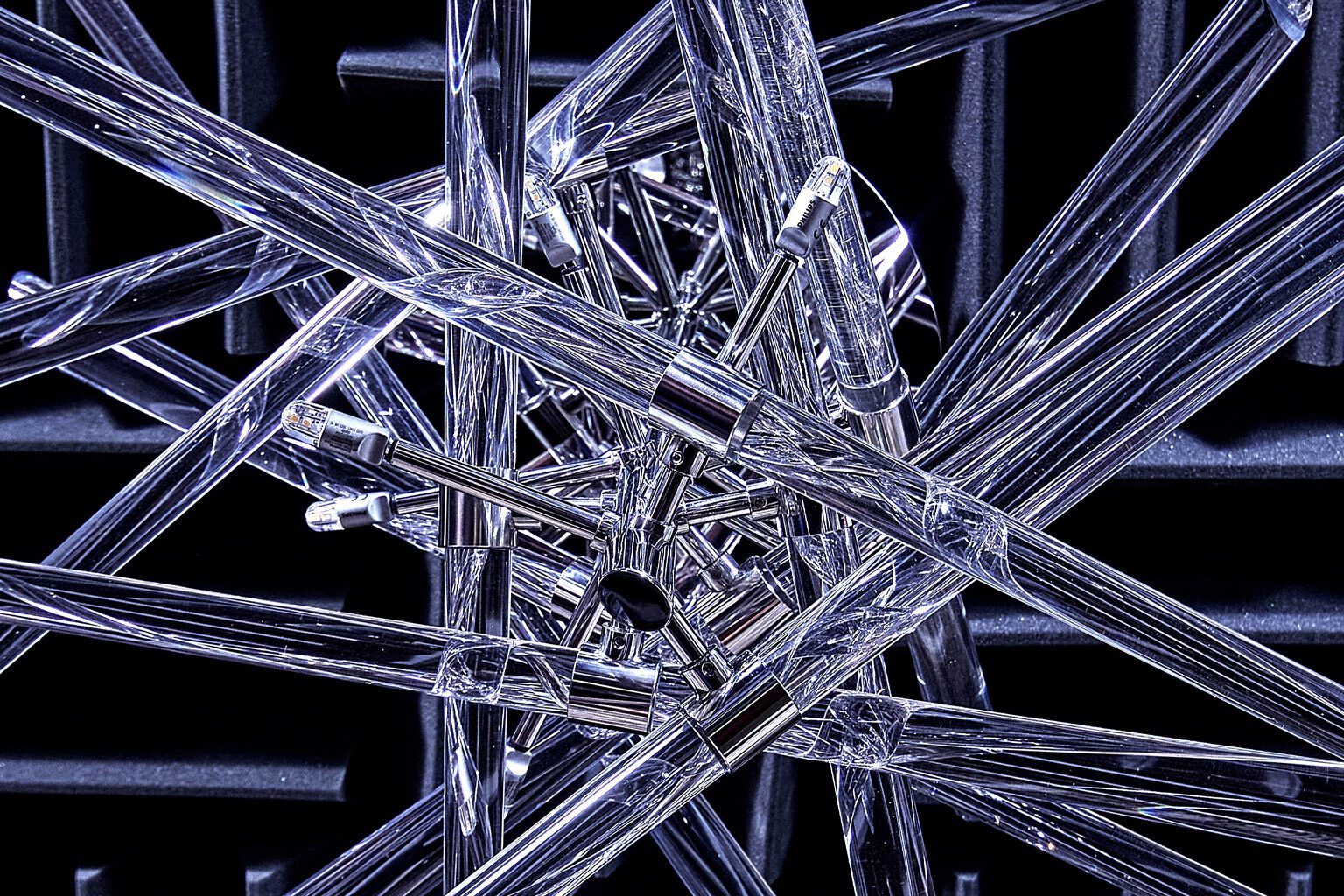 Monumentality across Media and Sizes 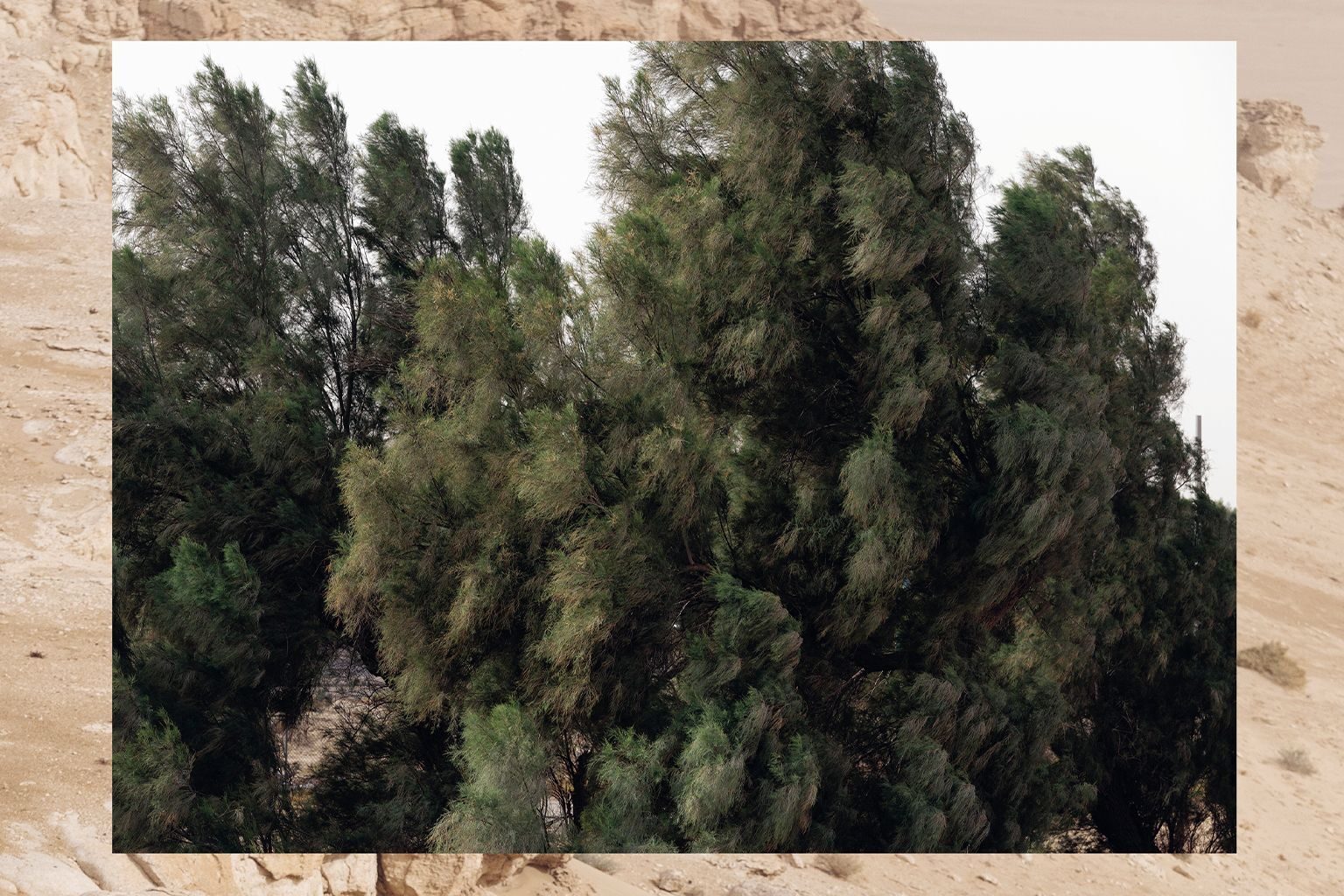 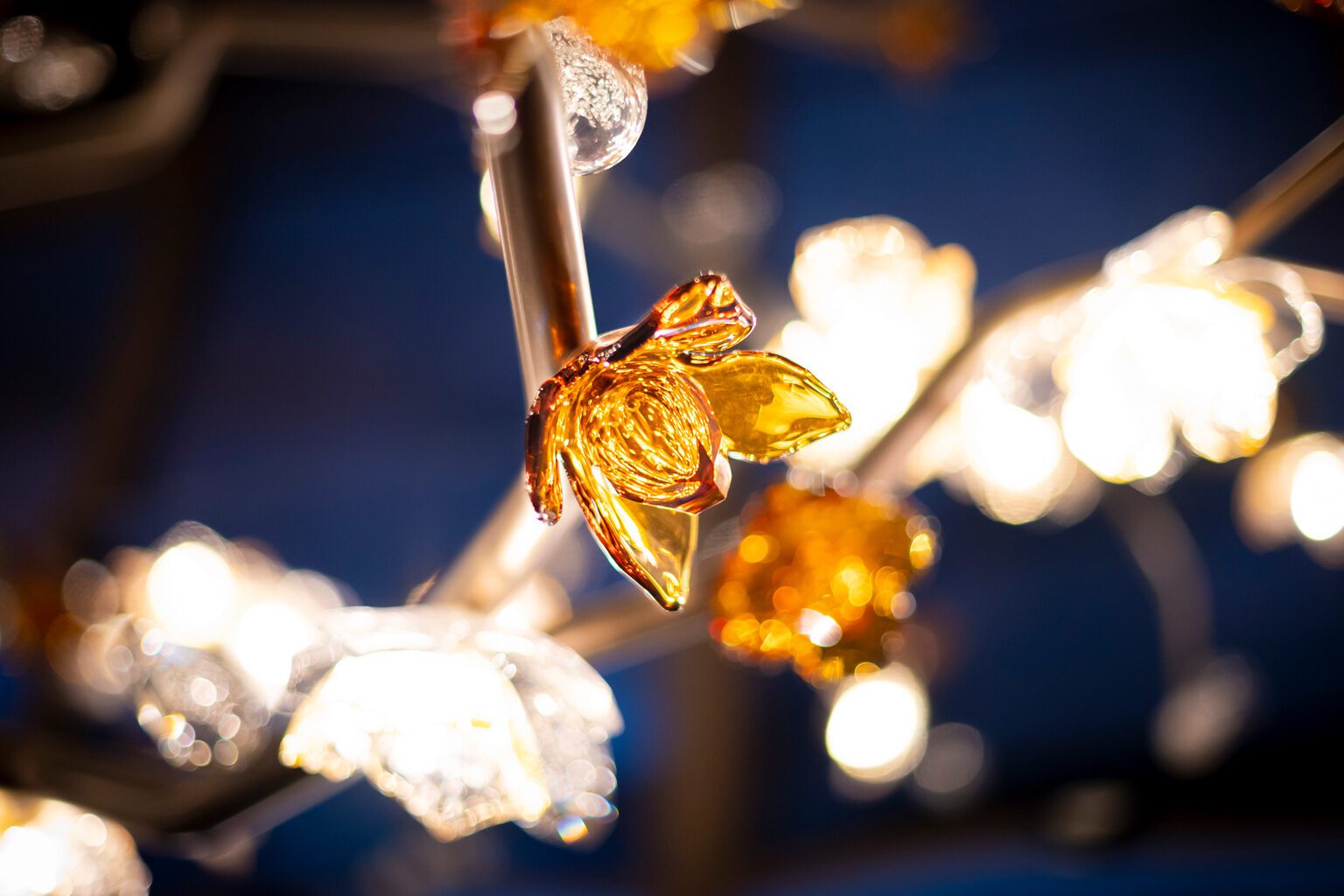 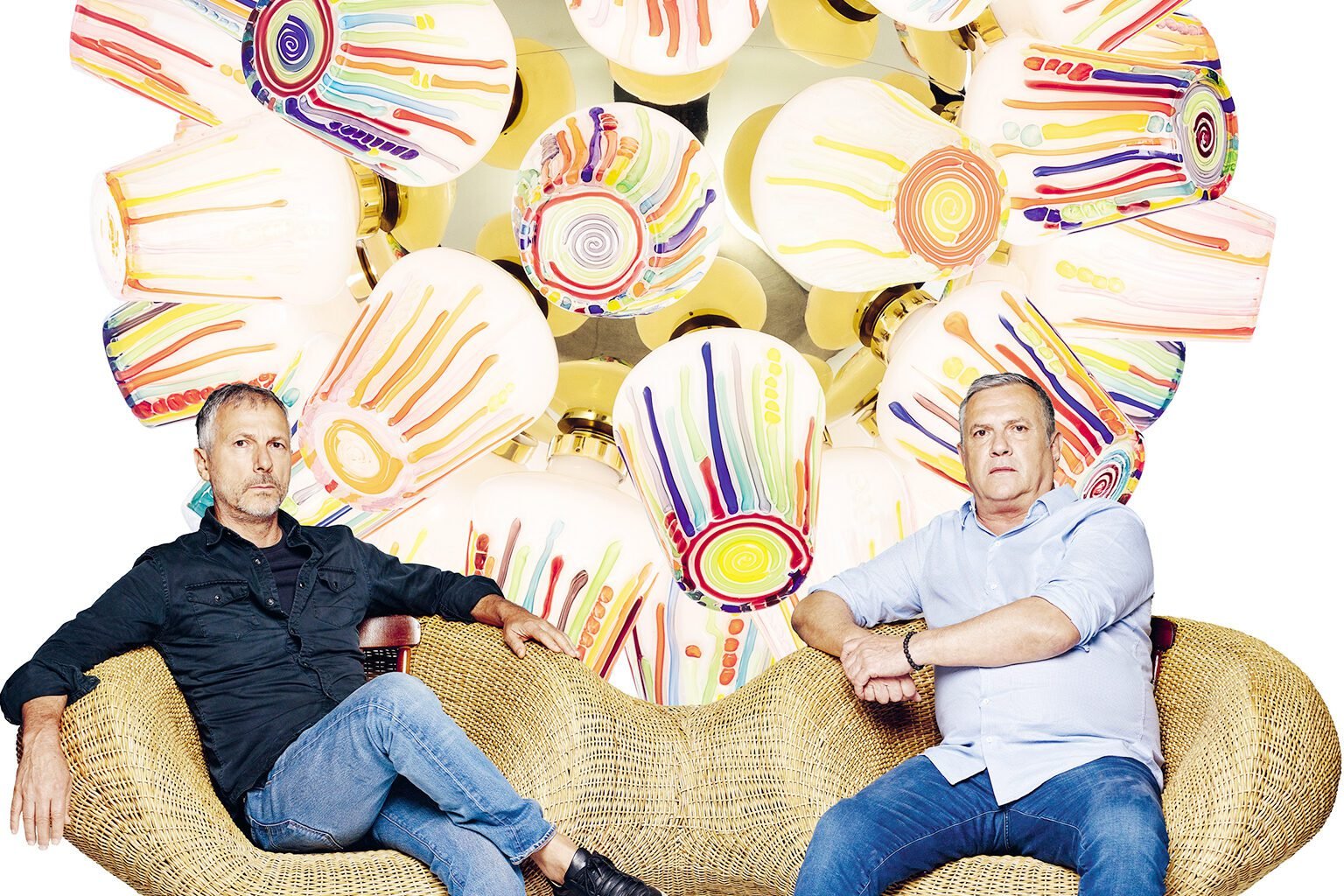 Getting To Know The Campanas 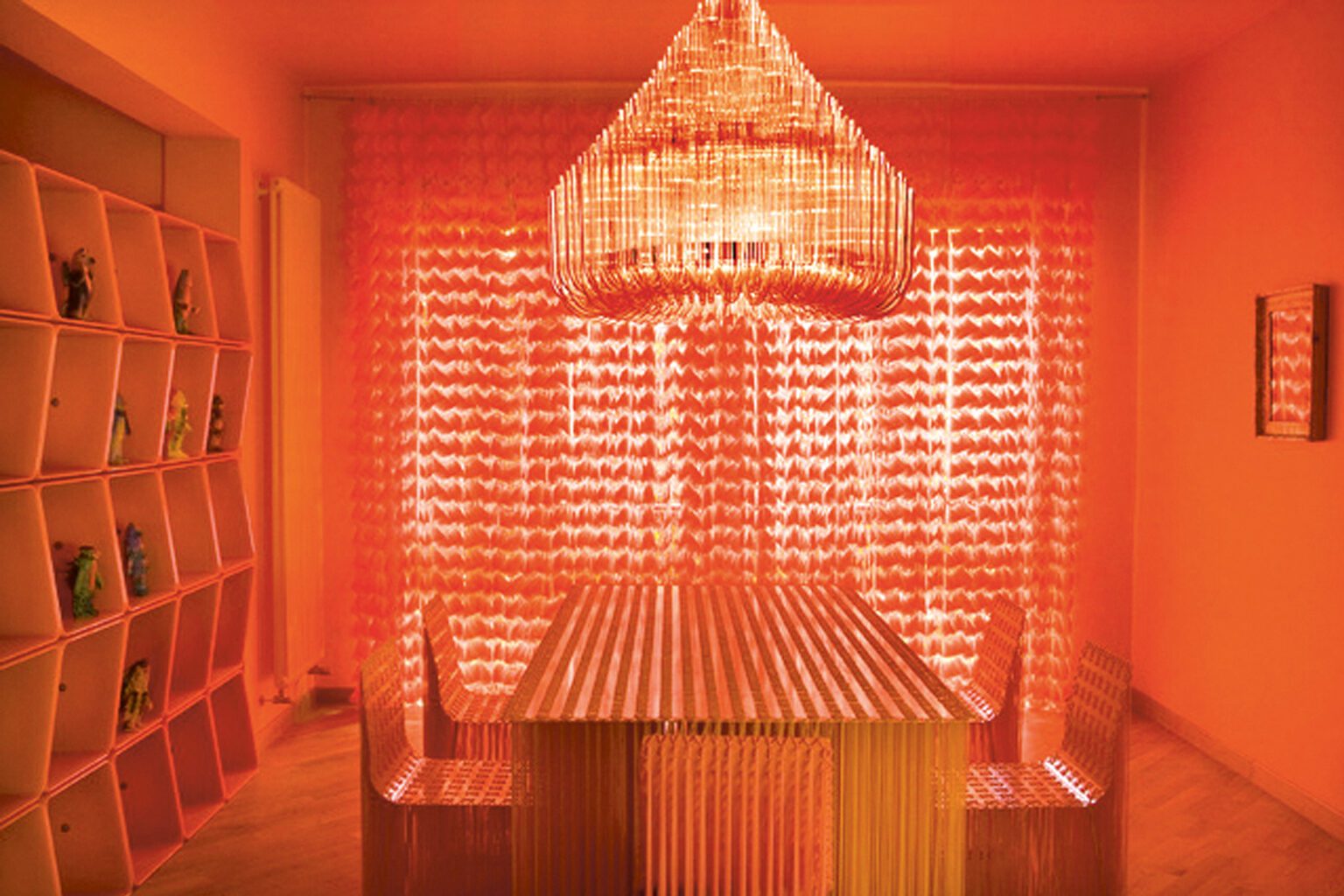